On Wednesday, March 19, 2014, the Gunnison County Board of County Commissioners made the decision to demolish the original courthouse structure that was built in 1881. This decision came after a partial collapse and the determination that further efforts to save the building would create safety concerns for the workers on-site. "It was with heavy hearts that we made the decision yesterday to take down the original 1881 courthouse structure. As commissioners, our two primary responsibilities are public health and safety, and fiscal responsibility. To continue in our restoration efforts of the building at this point would be both fiscally irresponsible and greatly risk the safety of many people. We are planning on using materials from the original building to recreate a structure that will be safe, sound and secure." 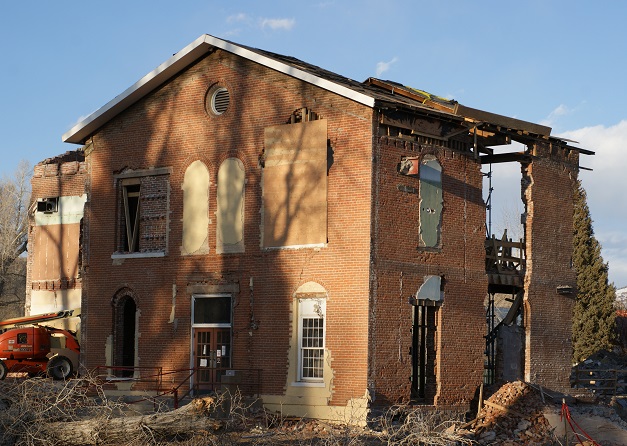 View a video of the demolition of the north end of the courthouse from March 3 through March 7, 2014. Additional videos will be displayed as they become available.

View a video of the demolition of the remainder of the historical 1881 structure and the two wings added by 1907. Take note that the original structure was planned to be saved, but a partial collapse can see seen above the right upper windows on March 14, and a large portion of the south wall (unseen by the camera) collapsed the same day.

Site work has been completed and construction has begun on the southern wing of the reconstructed courthouse, which will house the county administrative offices (County Manager, Finance, Human Resources), the County Attorney and Juvenile Services. Below you can view the time lapse video captured from April 5 through May 31, 2014.

The new Courthouse with the architectural replica of the former west wall rises in the center of the time lapse of June 1 through July 31, below.

The final form of the new courthouse can be seen in the below time lapse from August 1 through September 30, 2014. In early September, the trusses from the original structure were placed.

Exterior finishes can be seen being placed in this from October 1 through November 30, 2014.

This from December 1, through January 31, showcases the western brick façade to harken back to the original courthouse design.